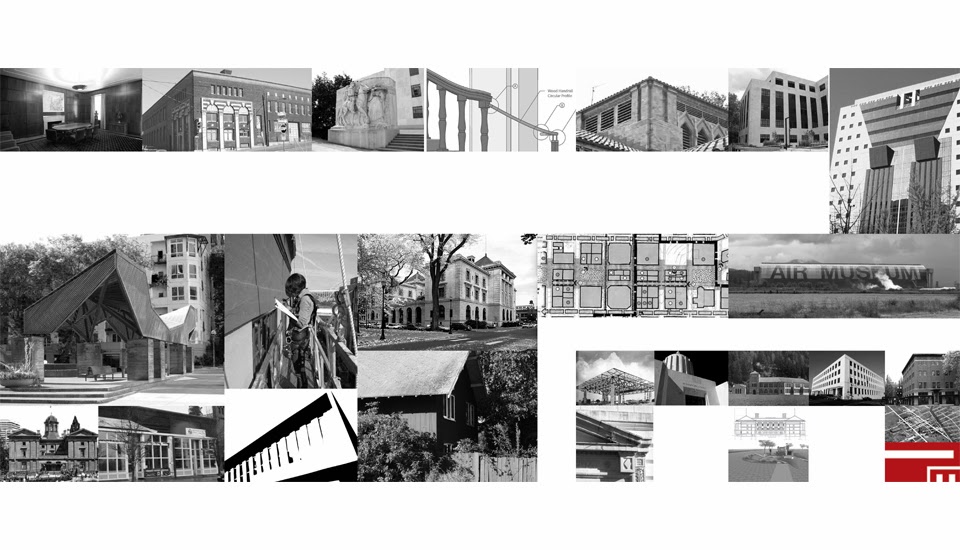 Posted by Peter Meijer Architect, PC at 9:08 AM No comments:

Towards a Death of Architecture

Buildings are physical representations of the social, economic, political, technological, and cultural climates of their eras of origin. Ultimately buildings represent our cultural heritage and our architectural history. However, mid-century modern era buildings are increasingly interpreted as antiquated architecture that is functionally obsolete and lacking use in today’s society. Our recent-past modern buildings are being labeled as “failed” or “useless” architecture. As a result, mid-century modern architecture is rapidly being demolished and replaced with newer sustainable structures believed to better represent our most current social and cultural ideals. Current architecture is believed to be far more aesthetically pleasing than their modern predecessors.

But in the context of society, including heritage, what constitutes “useful” architecture verses useless building? There must be a relationship of parts to complete the building, but structure and function alone do not equate to architecture.  Perhaps “useful” should be a term connected to architecture exhibiting enduring design excellence? Paradoxically, design excellence is tangled with style, and history demonstrates that style preference is ephemeral, subjective, and fluxuates at a high velocity. Yet the loss of style preference, or the falling out of design aesthetics favor, is one of the biggest rationale for the demolition of modern era buildings. Presently, Brutalism is at the crux of the demolition/ preservation debate.

Framed in the context of history, it can only follow that Brutalist buildings were going to be executed as formal monumental concrete structures that directly juxtapose (even challenge) their environments. But more often than not, the perspective of historic context is outnumbered by present aesthetic preference.  For example, Prentice Women’s Hospital (Bertrand Goldberg) in Chicago, the Berkeley Art Museum (Mario Ciampi) in California, and several of Paul Rudolph’s brute beauties were technological and architectural triumphs of their time. However, the Brutalist buildings like other modern era buildings that rate low on the aesthetic-scale have been equally disregarded in their maintenance. The argument for demolition based on deficiencies caused by a lack of maintenance becomes all too convenient.  The wide-spread demise of brutalist civic and urban buildings is a demise of the ideologies behind the intent of the architecture and those housed within.

Posted by Peter Meijer Architect, PC at 3:34 PM No comments:

Some of the greatest restoration challenges arise when historically significant works weather, degrade, are neglected, or simply have suffered through inappropriate renovations. Restoration strategies are compounded when original historic materials, either natural materials like wood or stone, or production processes are no longer available. And when the failure is due to improper design or inadequate construction methods, corrective restoration methods may alter or compromise the original design intent. The following three case studies illustrate restoration philosophies based on balancing preservation, resolving the underlying building deficiencies, and introducing “thoughtful change” in protecting significant local structures for future generations. 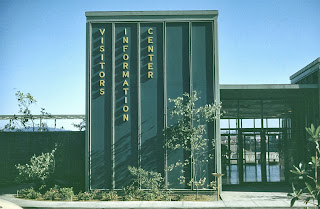 John Yeon’s 1948 Portland Visitors Center was designed as an exhibition showroom with large open spaces, a pinwheel plan, on a highway dividing median, accessible by car, and constructed of standardized wood framing components including recently developed experimental plywood. When the highway was replaced with a riverfront park and the Visitor Center programming was relocated, the singular purpose building became obsolete resulting in a number of incompatible conversions including substantial alteration of the main gallery space to an industrial kitchen. Contributing to the slow demise was the degradation of the exterior wood components and failure of the plywood as a result of the northwest climate and inadequate weather protection. By the time the Friends of John Yeon and the City of Portland Water Bureau invested resources into the restoration, the Visitor Center had lost or compromised 80% of its historic interior finishes and the exterior façade had been heavily altered. However, the original floor plan, massing, scale, exterior spaces, and essence of Yeon’s modular design and sense of place remained. The restoration approach focused on preserving these significant design elements while providing flexibility of interior layout. 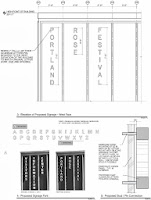 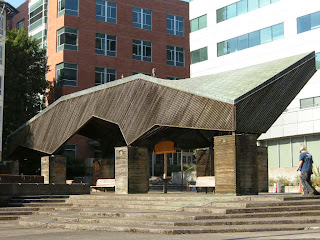 Moore, Lyndon, Turnbull & Whitaker’s 1965 Pavilion at Lawrence Halprin’s Lovejoy Fountain is a whimsical all wood structure with a copper shingle roof. Although a small structure, the pavilion represents a major mid-transitional work for Charles Moore as his design style moved from mid-century modern to Post-modern design. In keeping with the naturalistic design aesthetic established by Halprin, northwest wood species comprise the major structural system including the roof trusses, vertical post supports, and vertical cribs built from 2 x 4 members laid on their side and stacked. 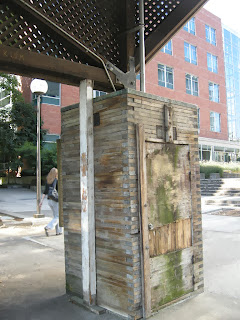 Vertical loads are transferred from the trusses to the wood posts and spread to the wood cribs. Under the point loading, the cribs have compressed resulting in a sag or lean in the roof structure. Since the 2 x 4 wood members have crushed, they cannot be restored or salvaged as part of the restoration effort so new members were designed to replace the historic material. 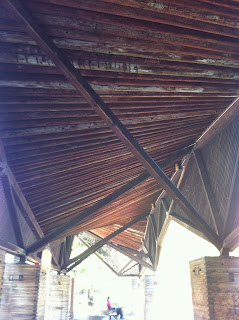 The restoration approach is intended to correct the structural deficiencies and replace the failed members with no changes to the historic appearance of the structure. The crib design allows for insertion of new steel elements, invisible from the exterior, capable of providing additional support for vertical loads. The difficulty arises because standard wood products available today have different visible and strength attributes from standard components available in 1965. Sourcing appropriate lumber is dependent upon clear and quantifiable specification, high quality inspection, and visual qualities. There are no structural standards for reclaimed or
recycled lumber compounding the incorporation of “old growth” lumber as part of a new structural system. When original source material is no longer available, best practices for narrowing the selection of new materials will of necessity be combined with subjective visual qualities and a best-guess scenario as to how the new material will age in place similarly to the historic material. There are no single solutions so experience is key. 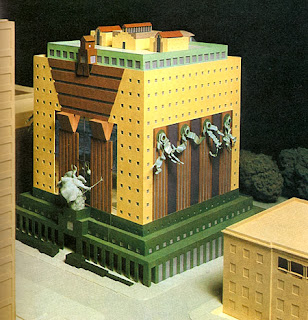 Whether or not Michael Graves’ Portland Building is considered a master work is greatly debated. Never the less, the building was nominated to the National Register of Historic Places after only 30 years and is recognizable around the world as THE building representing the start of Post Modernism. There is no debate to the fact that the building leaks. However, the method of building envelope repair could dramatically or minimally impact the exterior character defining features.

The façade of the Portland Building incorporates standardized aluminum single unit windows, aluminum windows ganged together to form a curtain wall, ceramic tile, and stucco veneer as the prominent construction materials. All of these systems or individual components are neither produced nor assembled currently in similar manners due to improvements in technology and building envelope science. 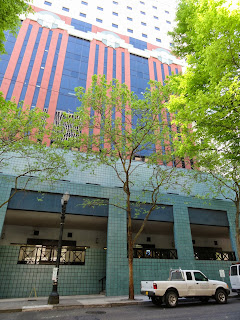 Proposals to improve envelop performance of both the individual window units and window systems are challenged in finding products that will both improve performance and retain the aesthetics of a Post Modern building. (i.e. retain the essence of criticism towards Post Modernism by preserving the appearance of insubstantial material installed as a thin veneer). Windows have always been a source of controversy in preservation and now the definition of windows has expanded to include curtain wall systems as the importance of preserving Recent Past and Modernism has entered into the mainstream. 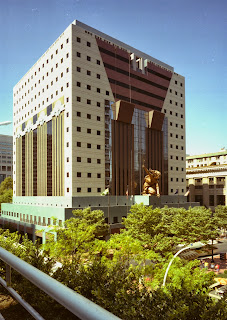 When a structure, like the Portland Building, relies heavily on the expression of its skin as the character defining feature, off the shelf solutions for fixing envelop deficiencies must be expanded to include customization, façade impact studies, robust strategies for solving the issue, and out-of-the-box thinking by conservators, architects, historic consultants, and building envelope experts. A collaborative approach based on the original architect’s design intent must drive the decision making. It is an unusual approach, but original design intent will be a key factor when resolving façade problems on Modern and Post Modern structures.
Posted by Peter Meijer Architect, PC at 11:09 AM No comments: 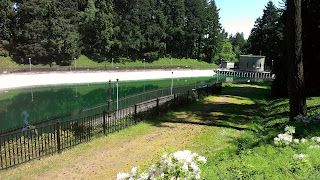 With the Portland City Council’s final decision not to further delay projects to build new reservoirs to replace the five historic open reservoirs, on the west side of the city in Washington Park a new below grade water storage tank is being planned in the general footprint of one reservoir. The second of the two reservoirs at Washington Park will be decommissioned and used for new purposes.

The implementation of underground storage tanks may still elicit a spirited discussion. And at the heart of the discussion is how to implement thoughtful change to a historic, well loved cultural resource to the rigors of rapidly evolving public safety and seismic protection mandates. 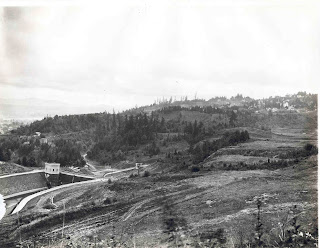 Reservoirs 3 and 4 were constructed as part of the Bull Run water system, a gravity-fed mountain watershed system built between 1894 and 1911 to provide the City of Portland with high quality drinking water. Reservoirs 3 and 4 continue to function as the city's primary water distribution source for the west side of Portland. The reservoirs have been in continuous operation for more than 100 years. They serve as a featured amenity enriching the landscape of Washington Park, one of Portland's largest and oldest parks, with vistas of open water, and period historic structures. Also due to their location on hills on the west side of the city, scenic views are afforded across the reservoir water.

As summarized in the National Register of Historic Places nomination, “one of the most defining landscape principle of Reservoirs 3 and 4 is the open expanse of water, their irregular shape, rusticated concrete structures, and ornate wrought iron detailing of fences and lampposts. The reservoirs are a striking and elegant addition to the serene forest that makes up this end of Washington Park. The surrounding forest is composed primarily of Douglas fir, western red cedar, and big leaf maple all predominating native tree species of the Pacific Northwest.” 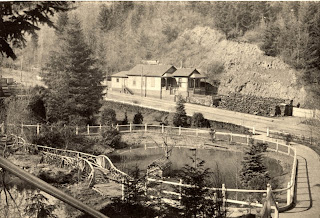 The challenge is to design a 100 year plus engineering solution while simultaneously designing a thoughtful change to the context, natural park setting, and historic district. Arising from the Olmsted Brothers vision for Portland and the City Beautiful movement, the changes to the Reservoirs offer an opportunity to evaluate the evolution of development outside Washington Park within the Park, changes to the Reservoirs themselves, public access, and protection of cultural amenities. If access to the “water” is transformed to a public amenity, how does the design enhance the serene qualities of the site? How should the change reconnect the reservoir area with the surrounding neighborhood and Park features? 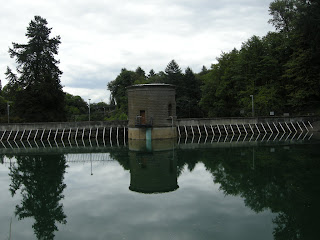 The reservoirs embody the challenge associated with retaining a historic place as both a visual element and a dynamic landscape. The safety, security and seismic solutions may alter the purpose of the visual feature and the interaction with the “water,” but that does not translate into a diminishing of a historic place. There are no easy answers. In the end, this final decision should be assuring that the Washington Park Reservoirs will continue to provide safe, reliable water storage, and to elicit wonder well  beyond the next 100 years.

Posted by Peter Meijer Architect, PC at 9:36 AM No comments:

Peter Meijer Architect, PC
Portland, Oregon, United States
Peter Meijer Architect, PC, (PMA) is a full service architecture firm integrating science, design and preservation. At PMA we are committed to the re-use and adaptability of existing architectural resources and the preservation of historic sites, buildings, and communities. PMA brings modern sensibilities to our cultural heritage by connecting people, ideas, and values to our existing built environments.